Back to Plant Digest Overview

In this newsletter I will be discussing plant spacing. In order to avoid crowding and have a pleasing appearance to your garden over time, one must know how far apart to plant. Most labels will have "rate of growth" information on them, but more research may be helpful as these rates are sometime applicable to a particular climate. 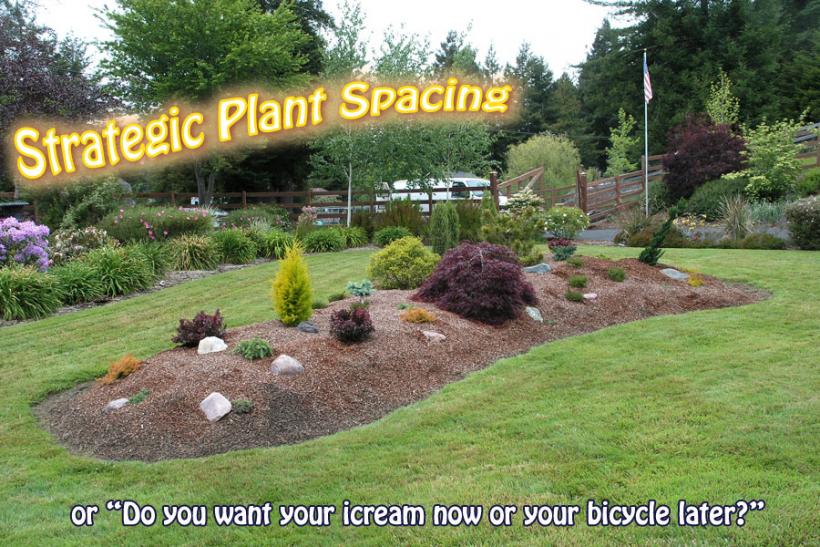 The first and most often question I am asked about any specific plant is "how fast will it grow?". Which, following my answer, is "I'll be dead by then!" and then some chuckles. With all of our technology, we all want things to happen faster than they do, including the rate that plants grow. The conundrum is that the faster a plant grows, the faster it becomes "too big". In order to know how much space to allow any particular plant, we need to know its growth rate. As you will find, most all books or online information will give an estimate of height and width of a plant relative to a 10 year space of time. This does not mean that the plant then stops growing. No, it will continue at the same rate of growth, or sometimes will slow down as time goes along. Also, growth rates may be influenced by the climate you are in. Cool coastal climates may allow plants to grow all year round, while cold climates may only have a few months for plants to expand in size. Finding out the most accurate growth rate of a particular plant grown in your climate may take some extra research, but it will definitely be valuable knowledge.

So, once we are fairly certain of the growth rate of a certain plant, or group of plants, we will then be able to know how big they get in 10, 20, or 30 years.

30 years is generally too far out there for most people to consider, but know full well that if you do pick slow and steady growers, you will never have to replace them over time. The alternative would be to select plants that attain a size we want in a shorter time period, but be ready to replace them when they have reached their "useful lifespan". The strategy that I would suggest involves a combination of the two. One might plant a few rhododendrons, some choice dwarf conifers, hydrangeas, barberry, and some of the smaller trees as the "bones" of the garden, then fill in with some plants that have a shorter life span to give more instant gratification.

Let's say that you want to plant some rhododendrons, heather and a few choice dwarf conifers. Of these 3 plant groups, the heather has a shorter life span, so can be used as a filler for a few years as the other plants get larger. This works great for those, like myself who want things to look "instantly" great, and tend to over-plant. Notice where the shorter lived heather is planted relative to the longer lived plants. 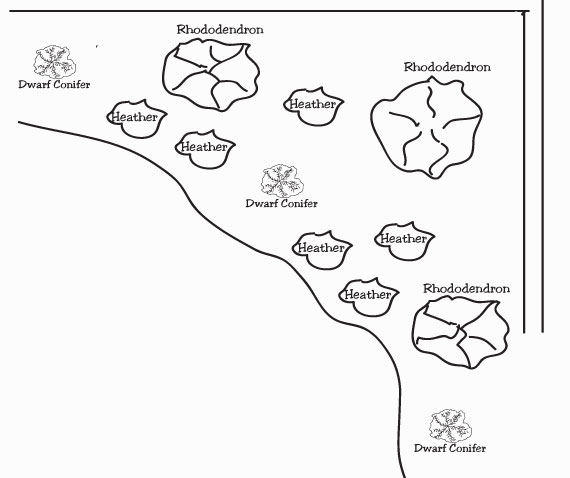 Since heather has a shorter decorative life span, they can be removed at some point, leaving the long lived rhododendrons and dwarf conifers that will only get better over time. Of course this is variety dependent, so care must be taken to pick plants that will grow to the size needed in the long run. Also, annuals or perennials may be used as filler plants, and one may change the seasonal "look" with these types used as filler plants each year. In the drawing below, you can see how the dwarf conifers have grown larger, replacing the filler plants. 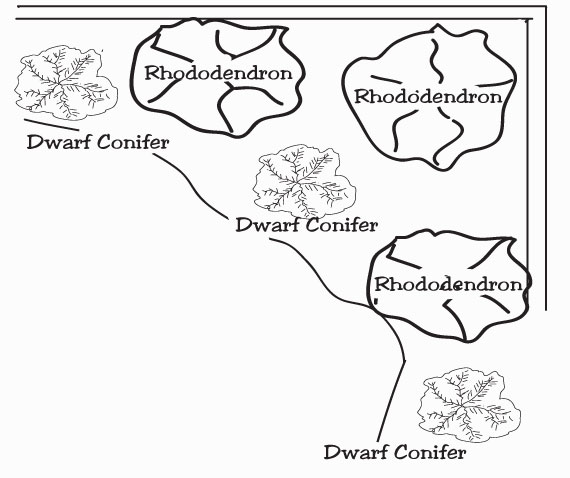 Below is a real life example of this technique. 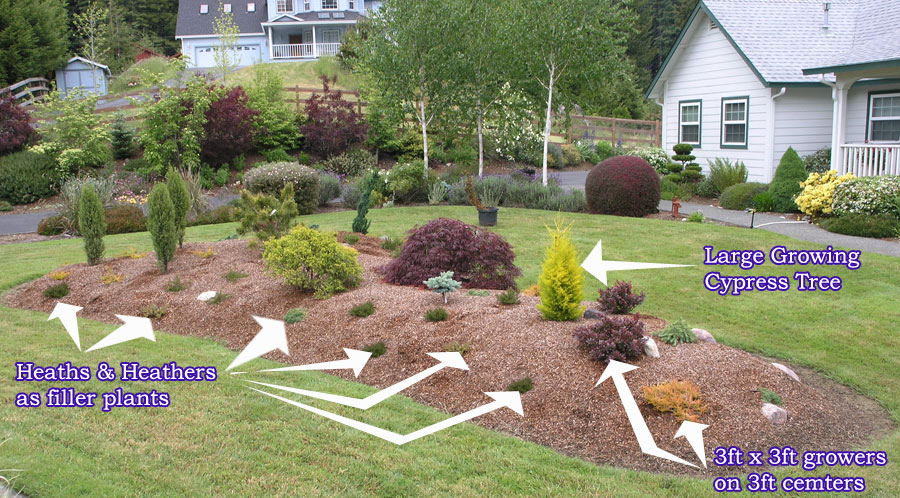 At planting time, Calluna and Erica plants were added to insure a "full" look. After 6 or 8 years, some of these were taken out, a few at a time, to allow room for the more long lived plants. There needs to be enough space for the largest plants, like the golden Cypress in the center of the planting, so no digging and moving of plants is required after 10 years. 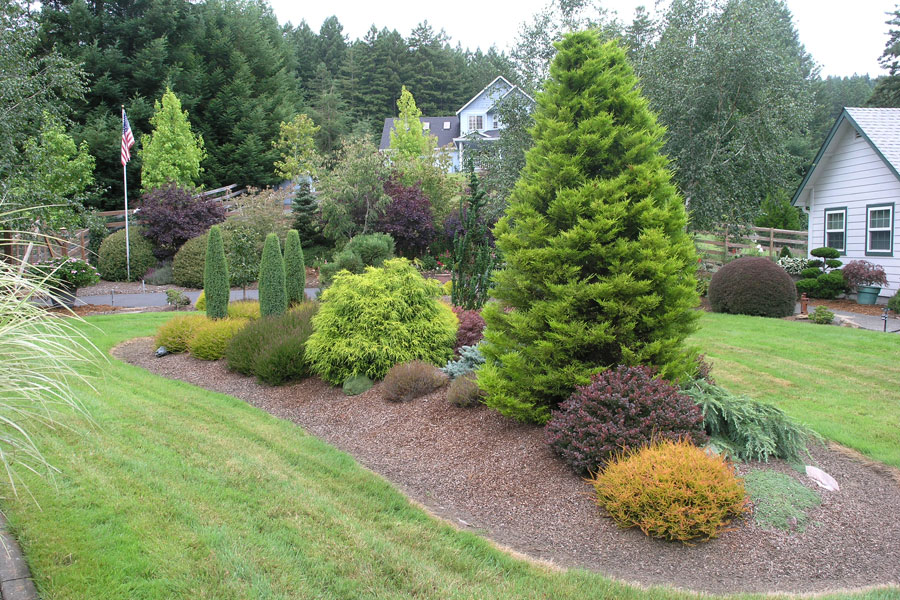 Notice, 7 years later, how some of the Calluna or Erica remain, but some have been removed. The initial spacing of the orange Thuja occ. 'Rheingold' and the dark red-maroon Berberis thun. 'Crimson Pygmy' was good, as the plants do not appear crowded. Also, notice how important foliage color becomes. If all of the plant material had been green, with the design based on flower color, there would only be seasonal interest. Planting designs that rely on foliage for color contrast, with flowering being a bonus, will always be the most pleasing year round.

Another example below of good plant spacing over time. 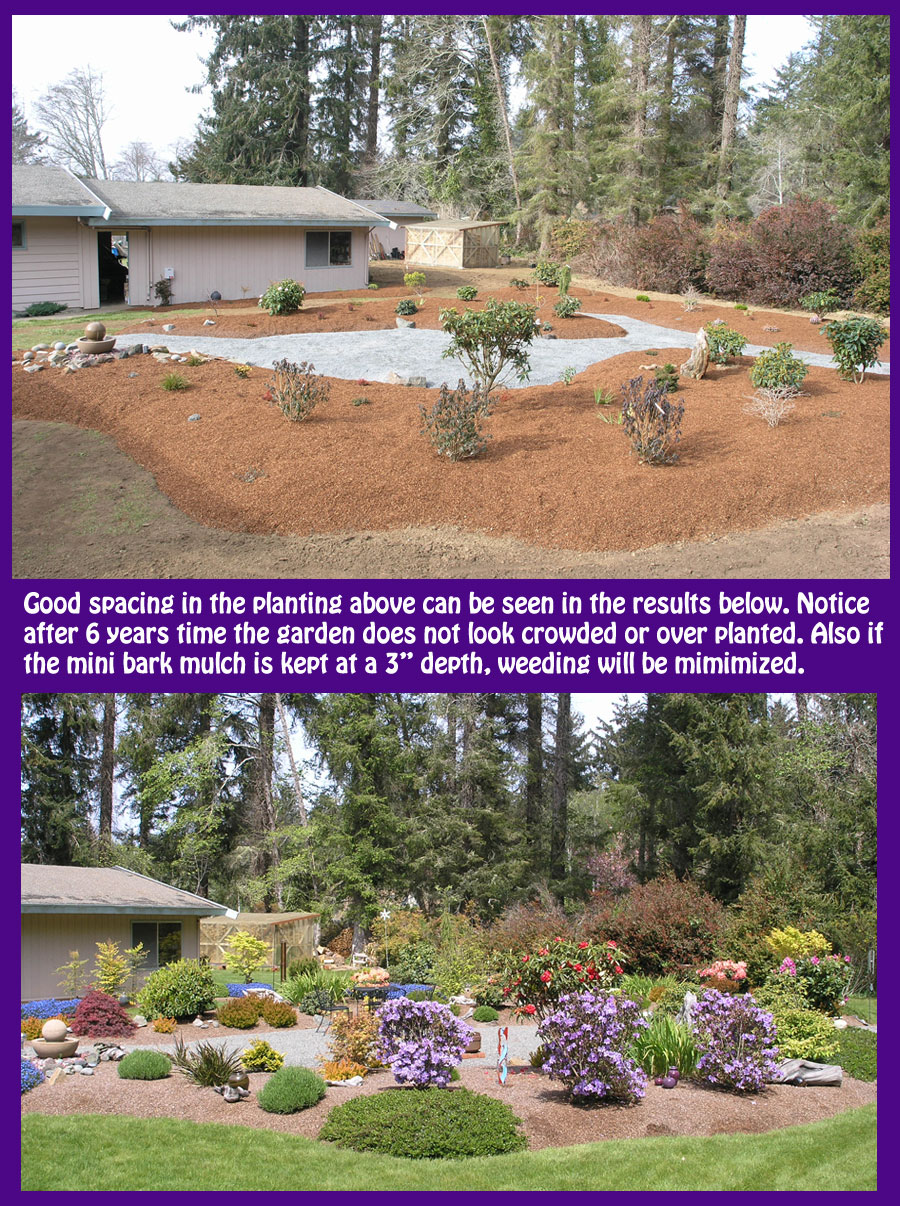 Wrong Plants for the Space

Sometimes we choose the wrong plants for a given space. Years later, we realize this and must be ruthless and remove them. Here is a series of before and after photos showing how making the hard decision pays off.

Below shows the results of planting the wrong plants for the space. 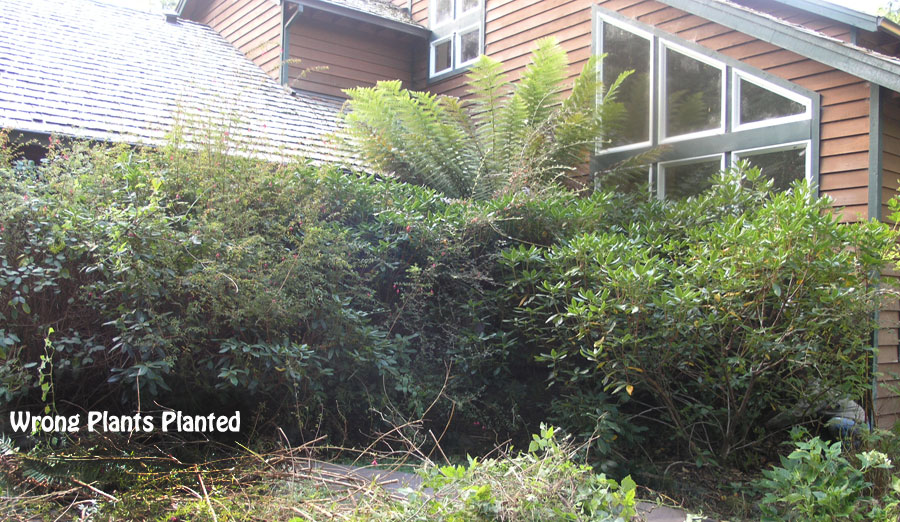 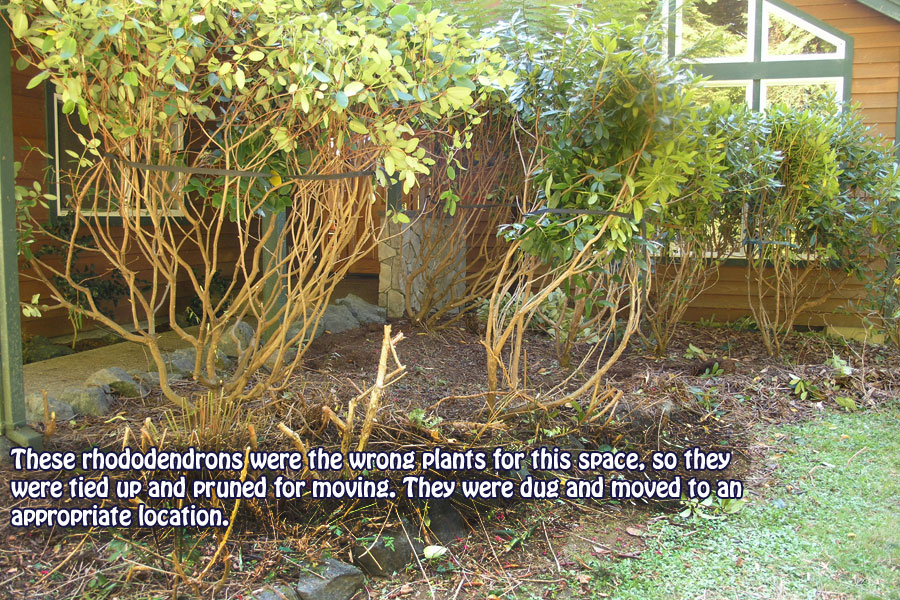 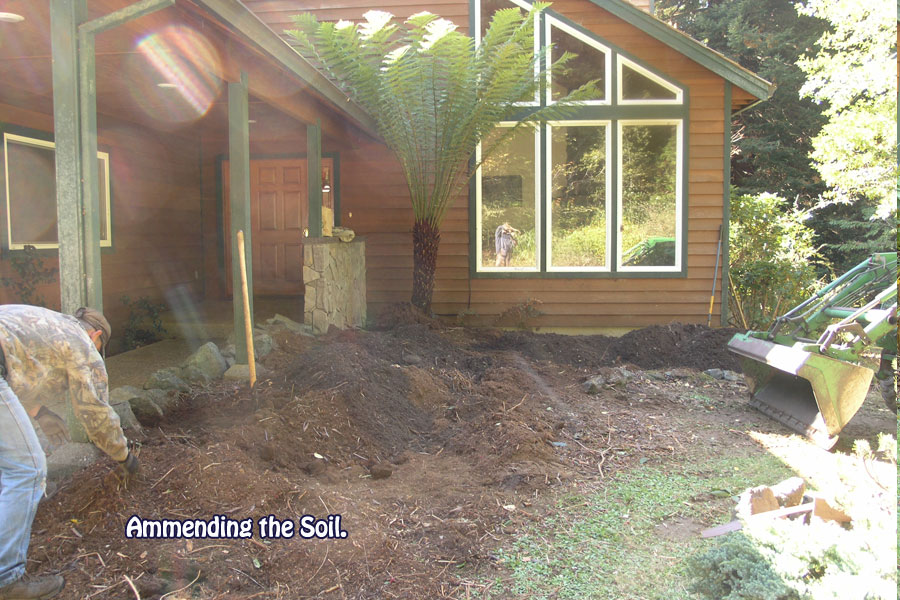 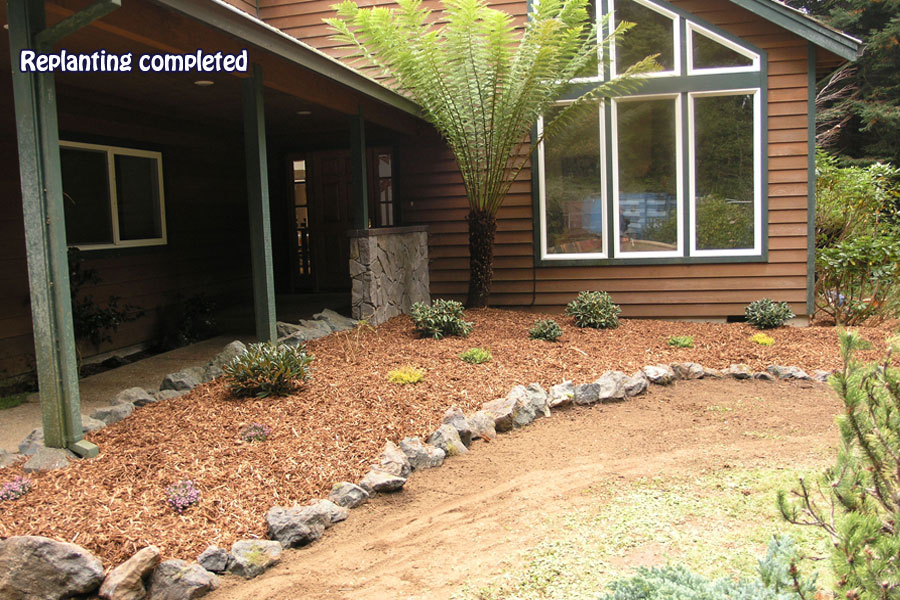 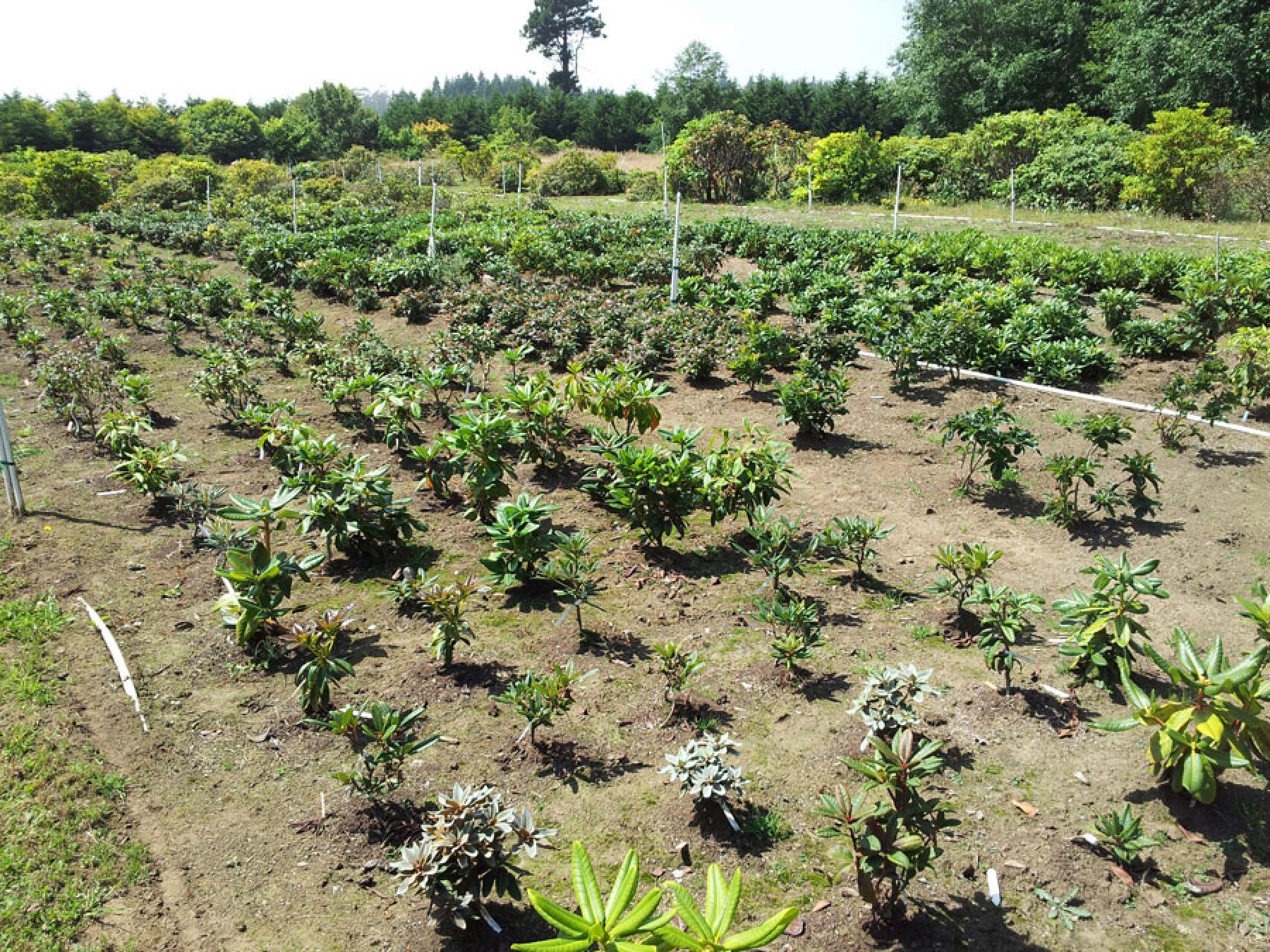 Every week something new goes on sale. Check back frequently for new deals and offers as we rearrange our stock.

Curious?
Check it Out